Monica suggested that I emphasize photos over text but Petro said that he likes my thoughts.  So I’ll keep rolling with the blogs.

Today was our first really big day of training.  JD suggested that we roll at 6:30am to avoid the road works on Trail Ridge Rd — very good call and we were over 12,000 feet before 9am.  As you’ll see in the photos the views were spectacular.

The pace was solid on the way up the climb and I manage to keep my power average rising from 30-120 minutes on the ride, which isn’t easy when you’re topping out over 12,000 ft.  JD and I worked together really well on the climb (a lot better than BoCO camp when I blew myself up with attacks on Mt Evans).

Petro has decided that we need to sprint for every city limits sign in Colorado — that takes it toll after a while but I did manage to get over 1,000 watts for the Granby sprint.  It was downhill from there for me but I hung on for 2nd on the stage (JD won).

We had a long regroup at the motel then checked out the brand new rec center here in Fraser/Winter Park — big improvement over Snow Mountain Ranch.  JD suggested Monsy 100s (24×100 on various splits) so I ended up with ~3400yds.  We squeezed in the run before the swim.

I had a blog in my head about the why of triathlon for me.  However, I’m pretty beat and Monica told me to keep it short.  So that’s it for today! 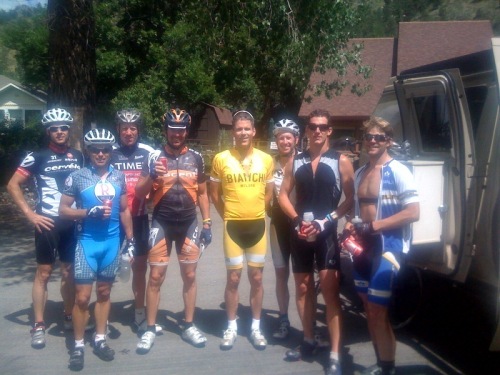 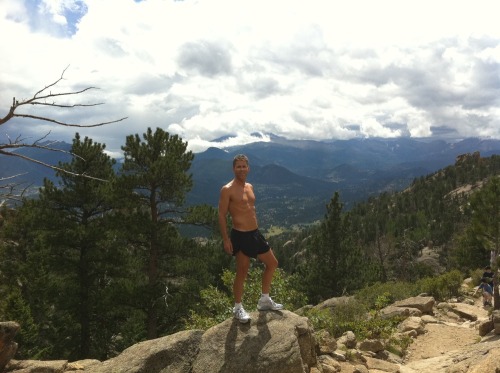 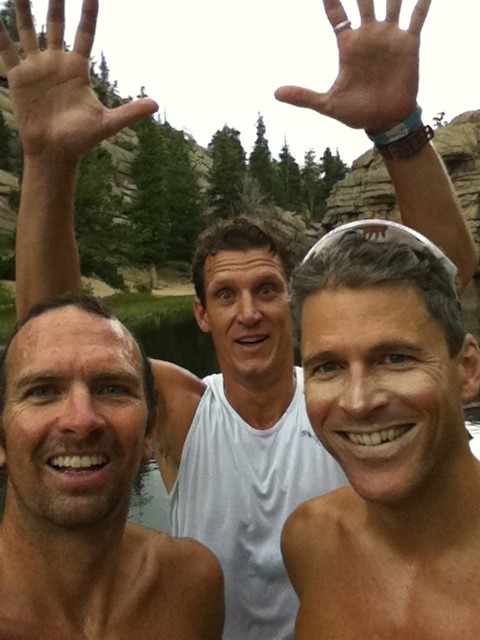 A little bit more about ManCamp — with the strategic review that we’re doing for Endurance Corner, I am getting a clearer idea about what the team and coaches are looking for from EC.  I’ve also been thinking about my role in the business — that’s why I started an personal blog for my non-EC stuff.  We all want EC to be it’s own thing.

I have a good idea shaping up on how I want to adjust my life over the next 12 months (create more freedom) but what I’m not sure of is how much training I really want to do.  So I figured a week, mainly, off the grid with some buddies would let me shake that out.

Day One was fun and my form is surprisingly good.  All up a little under six hours of training with a lot of quality in there.

We have five guys along for the full camp as well as a few day trippers.  We don’t really have a formal structure but we’ve come to some benchmarks that we’re using (3K for a swim, 5 miles for a run, and whatever the ride stage is for the day).

Today’s ride was Boulder to Estes Park via Big Thompson Canyon and Glen Haven.  File is available at this link ( http://tpks.ws/vhzQ ) – Vince, I hit 995w for the Drake City Limits sprint after Petro’s lead out.  The guys told me that I should have hit it a touch harder for 1000w+ but I was worried as the KOM was still 10 miles away.

We’ve also decided that we’ll grow the camp slowly so each of the Originals (G, Petro, Doc J, Scot, JD) gets an invite for 2011.  If you invite someone then you’re responsible for them – also the Original needs to come back for the invite to be valid.  At dinner Justin shared a story about a camp where he worked — you had to be invited back as a camper and they mailed you an invite each year with a feather if you could come back.  I think J wants to send feathers out for next year…

JD said that his bike computer showed we didn’t average 30 km/hr for the ride but my ride showed 29.8 so I’m giving myself the benefit of the doubt.  It was a reasonable effort given a gentle first hour and a 2000 ft net elevation gain for the ride (we are over 7500 ft at our motel tonight).  We had Denny, Taylor and Chris along for DayTripper support – they rode another 100K after dropping us off at Estes.  Alan and Jen are here to help us get through the week — AC raced yesterday so he’s probably at least 36 hours away from hitting the hills in any substantial fashion.

Lots of good memories on this route that we’re using.  Been here with a lot of great friends over the years. 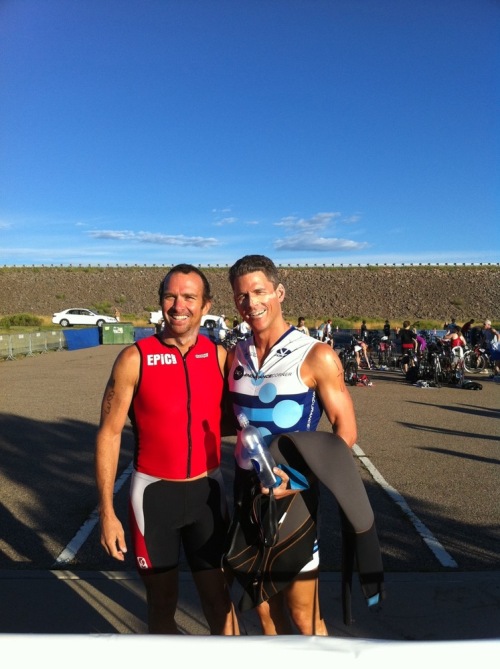 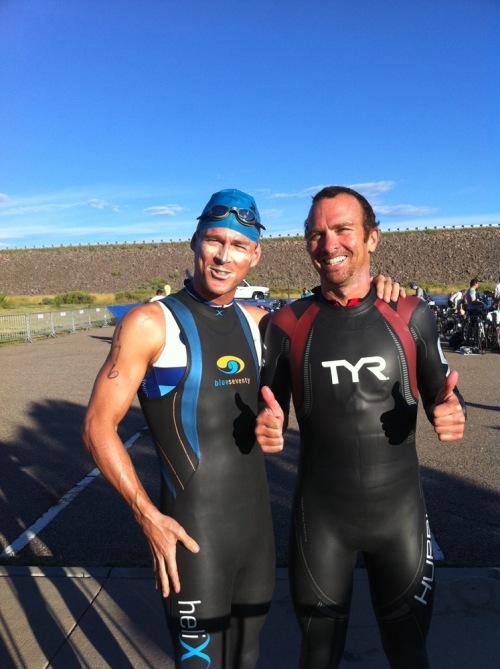 First time in a while that I didn’t draft the whole way on the swim — Petro said it was easier to swim on my feet than in Ironman.  Either I had an off day or he’s swimming WAY too hard on his long stuff.

Bike was short at ~35K so my times of 51 low (bike) and 1:49 (overall) are flattering, and inaccurate.  First run where I didn’t feel like the incredible hulk — think I knocked a kilo off with Hood River camp and eating well after.

Tomorrow is an easy day before the official trip kick off on Monday.